Established in 2016, Noble Roots Brewing company has become known for their craft beers. Owned by a father and son team, Marvin and Alex Falish, they brew and sell IPAÕs, Belgian Ales, Amber Ales, Stouts, Blond Ales, Cream Ales, Brown AleÕs, and more. They have a small taproom that can only fit about 50 people. The Taproom is only open on Thursdays, Fridays, and Saturdays. On Thursdays and Fridays the Tap room is open from 4 pm to 10 pm. Then on Saturdays from 2 pm to 10 pm.

Is this your business?Claim it now.

Make sure your information is up to date. 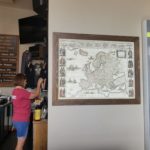